Cindy Margolis is an American glamour spokesmodel and actress who has modeled in advertising for companies such as Reebok, Vidal Sassoon, Coors, Frederick’s of Hollywood, Hanes, and Sunkist. She appeared as a fembot in the 1997 movie Austin Powers: International Man of Mystery. She had her own talk show broadcast from Miami called The Cindy Margolis Show in 2000. She was declared by the “Guinness Book of World Records” as the Most Downloaded woman ever in 1999. 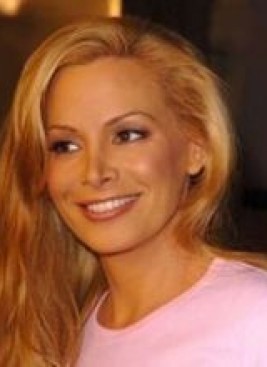 Born Cynthia Dawn Margolis on October 1, 1965 in Los Angeles, California, to parents Karyn O. and William C. Margolis, she was raised Jewish. Margolis studied business at California State University. She was married to restaurateur Guy Starkman from 1998 to 2009. She has a son, Nicholas and twin daughters Sabrina and Sierra.

Books: Having a Baby– when the Old-fashioned Way Isn’t Working: Hope and Help for Everyone Facing Infertility

Cindy Margolis Facts:
*She was born on October 1, 1965 in Los Angeles, California, USA.
*She began her career with a business class project on greeting cards at the California State University at Northridge.
*She was Miss Makita Power Tools 1986 and did appearances at woodworking trade shows.
*She and her ex-husband Guy Starkman had an open marriage.
*Visit her official website: www.cindymargolis.com
*Follow her on Twitter, Facebook and Instagram.