Kimberley Walsh is a British singer, songwriter, model, TV presenter, dancer, and actress. She is best known as a member of the English-Irish pop girl group, Girls Aloud. In 2013, she released her first solo album, Centre Stage, via Decca Records, which reached #18 in UK, #99 in Ireland, and #23 in Scottish music charts. From October of 2011 to May of 2012, she played the role of Princess Fiona in a West End theatre production of Shrek: The Musical. She has also worked as a presenter for several television shows including, The X Factor. Born Kimberley Jane Walsh on November 20, 1981 in Bradford, England, to parents Diane and John Walsh, she was raised in Allerton, West Yorkshire with her three siblings Adam, Sally and Amy. She was discovered in reality singing contest Popstars: The Rivals in 2002. Since January 30, 2016, she has been married to Justin Scott. Together they have one son, Bobby Scott. 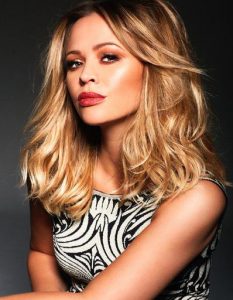 Kimberley Walsh Facts:
*She was born in Bradford, West Yorkshire, and grew up in Allerton, West Yorkshire.
*She began her career in 1986.
*She was a member of the girl group, Girls Aloud (2002-2013).
*In 2004, she began dating Justin Scott.
*She was one of the runners-up in the 2012 series of Strictly Come Dancing.
*She ranked #37 in FHM’s annual list of “100 Sexiest Woman in the World” in 2009.
*Visit her official website: www.kimberleywalshofficial.com
*Follow her on Twitter, Facebook and Instagram.