Claire Cooper is a British actress. She is best known for her portrayal of Jacqui McQueen on the Channel 4 soap opera Hollyoaks. She was nominated for a National Television Award for Outstanding Serial Drama Performance in 2012. She has made guest appearances in a number of television shows such as Coronation Street, Big Brother’s Big Mouth, Ready, Steady, Cook, and 12 Monkeys. Cooper co-owns clothing rental boutique The Closet in Liverpool with Hollyoaks co-stars Leah Hackett and Jennifer Metcalfe. 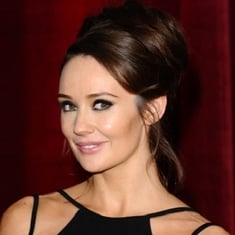 Born Claire Elizabeth Cooper on October 26, 1980 in Wakefield, United Kingdom, Cooper was educated at Sandal Endowed Middle School and attended the Guildford School of Acting in Guildford, Surrey. She married her boyfriend of 5 years Emmett J Scanlan in December 2015. They have a son together.

Claire Cooper Facts:
*She was born on October 26, 1980 in Wakefield, United Kingdom.
*She was a British champion gymnast for 10 years while attending Sandal Endowed Middle School.
*She attended the Guildford School of Acting.
*She starred as Jacqui McQueen in Channel 4 soap opera Hollyoaks from 2006 to 2013.
*She married Emmett J. Scanlan in December 2015.
*Follow her on Twitter and Instagram.