Curtis Stone is an Australian celebrity chef, TV personality and author who was a contestant on NBC’s reality show The Celebrity Apprentice 3, in which he finished in fourth place. Curtis has appeared twice on NBC’s The Today Show. He has also appeared on Martha Stewart’s show, Martha Stewart Living, Stacy London’s talk show Fashionably Late with Stacy London, as well as The Ellen DeGeneres Show, the Fox Morning Show and Entertainment Tonight. He has been advertising groceries for Coles Supermarkets in Australia since 2010. 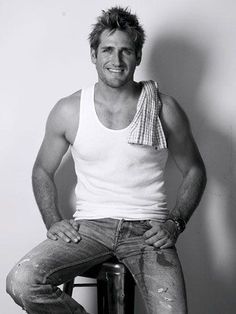 Born Curtis Travis Stone on November 4, 1975 in Melbourne, Australia, to parents Lorraine and Bryan Stone, he has a brother named Luke. Stone’s parents separated when he was just 2 years old. He studied for a Bachelor of Business before deciding to pursue a career as a chef. He began dating actress Lindsay Price in 2009 and they got married in 2013. The couple had their first son, Hudson, in 2011 and a second son, Emerson, in 2014.

Curtis Stone Facts:
*He was born on November 4, 1975 in Melbourne, Australia.
*His grandmother taught him to cook when he was four years old.
*He began cooking at The Savoy Hotel, in his hometown of Melbourne Australia, at the age of 18.
*In 2010, he participated in The Celebrity Apprentice 3.
*He opened his first restaurant, Maude, in Beverly Hills, California in February 2014.
*He opened a second restaurant, Gwen, in Hollywood, California in 2016.
*He is a fan of the Geelong Football Club.
*Visit his official website: www.curtisstone.com
*Follow him on Twitter, Facebook and Instagram.