Clark Duke is an American actor. He is best known for his roles in television, such as Greek, The Office, and Two and a Half Men, and in the films Kick-Ass, Sex Drive, Hot Tub Time Machine and the 2012 A Thousand Words. He was nominated for a Young Artist Award for his work on Hearts Afire in 1992. In 2006, Duke created, wrote, directed, and produced a short-form comedy series entitled “Clark and Michael” along with best friend Michael Cera. In the show, he played a fictional version of himself. Born on May 5, 1985 in Glenwood, Arkansas, USA, to parents Angela and Ronnie Duke, he was raised a Baptist. His ancestry includes English, Irish, Scottish, German, Swiss-German and Welsh. He was previously in a relationship with Canadian actress Amanda Crew. 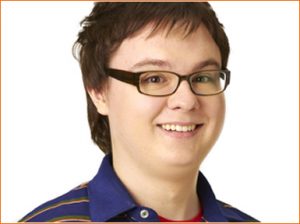 Clark Duke Facts:
*He was born on May 5, 1985 in Glenwood, Arkansas, USA.
*He belongs to English, Irish, Scottish, German, Swiss-German and Welsh descent.
*He started his career at a very early age, appearing in commercials.
*He is best friend with Michael Cera, with whom he created, wrote, directed, and produced the web series Clark and Michael (2006) in which Duke plays a fictional version of himself.
*Follow him on Twitter.