British actor Clive Owen who became recognized for his role in the ITV series Chancer from 1990 to 1991. He played Larry Gray in the 2004 film Closer, for which he won a Golden Globe and a BAFTA Award, and received an Academy Award for Best Supporting Actor nomination. His other notable works include Sin City, Children of Men, Inside Man, Croupier, The International, and King Arthur. Clive was born to Pamela and Jess Owen, on October 3, 1964 in Keresley, Coventry, Warwickshire, England, UK. His father left his family when he was 3, and was raised by his mother and stepfather. He has four brothers. He has been married to Sarah-Jane Fenton since March 1995. They have two daughters, Eve and Hannah. 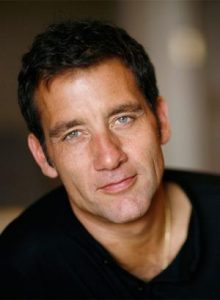 Clive Owen Education:
He completed his schooling from Royal Academy of Dramatic Art.

Clive Owen Facts:
*His father left his family when he was 3, and was raised by his mother and stepfather.
*He made his acting debut when he was 13.
*He made his film debut in the 1988 film Vroom.
*In June 2007, he was placed number 5 in Elle (France) Magazine’s “15 Sexiest Men” poll.
*Empire Magazines ranked him #25 in the list of 100 Sexiest Stars.

“I had to ride a horse once. In ‘King Arthur.’ I said I could ride, but I had to call for lessons on the day the deal was signed. I started out on this little chunky thing and slowly moved up. It was months of work.” – Clive Owen