Colin Farrell is an Irish actor. He is best known for his roles in the films Tigerland, Minority Report, Phone Booth, The Recruit, S.W.A.T., Alexander, Miami Vice, Dumbo and In Bruges. Farrell won a Golden Globe Award for his performance in In Bruges. His other film credits include Horrible Bosses, The Killing of a Sacred Deer, The Beguiled, Roman J. Israel, Esq., Dumbo, Crazy Heart, The Lobster and Minority Report. He is also known for his roles in the television dramas Ballykissangel, Falling for a Dancer, and True Detective. Born Colin James Farrell on May 31, 1976 in Castleknock, Dublin, Ireland, to parents Rita and Eamon Farrell, he is the youngest of four children, with brother Eamonn and two sisters: Catherine and Claudine. He was educated at St. Brigid’s National School, Castleknock College, and Gormanston College in County Meath. He made his film debut in 1997 with Drinking Crude in the role of Click. Farrell married Amelia Warner in a non-legal ceremony in 2002; they ended the relationship four months later. He has two children, one with model Kim Bordenave and another with Polish actress Alicja Bachleda-Curus. 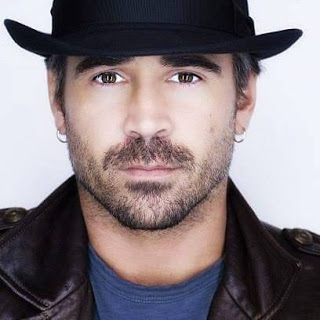 Colin Farrell Facts:
*He was born on May 31, 1976 in Castleknock, Dublin, Ireland.
*His father, Eamon, played football for Shamrock Rovers FC and ran a health food shop.
*He played soccer during his youth.
*He worked as a line dancing instructor at the Docs nightclub in Limerick.
*People Magazine named him one of the top 50 Most Beautiful People in the World in 2003.
*He was voted 6th in ‘The World’s Sexiest Man of 2003’ in Company magazine.
*He has two tattoos on his left forearm (Carpe Diem and a black cross).
*He cites Al Pacino, Steve McQueen, Paul Newman, Clint Eastwood, James Caan and Marlon Brando as acting idols and influences.
*He is good friends with Jeremy Renner.