Seth Greenberg is an American college basketball broadcaster and former coach, currently works as an analyst for ESPN. Before taking the position at ESPN he was a coach for 34 years, the last 22 as a head coach. He has been the head coach at Long Beach State (1990-1996), the University of South Florida (1996-2003), and Virginia Tech (2003-2012). Born Seth Vincent Greenberg on April 18, 1956 in Plainview, New York, USA, he is one of the three sons of Marilyn and Ralph Greenberg. One of his brothers, Brad, also became a college basketball coach. Following graduation from John F. Kennedy High School in Plainview in 1974, he attended Fairleigh Dickinson University in New Jersey. He graduated with a B.A. in broadcast journalism in 1978. He was an assistant coach at Columbia University under Buddy Mahar from 1978 to June 1980. He is married to Karen Greenberg, with whom he has three daughters. 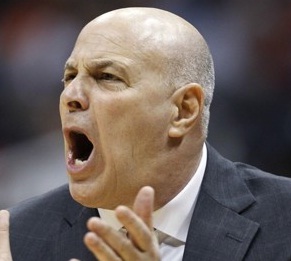 Seth Greenberg Facts:
*He was born on April 18, 1956 in Plainview, New York, USA.
*He joined ESPN in 2012 as a college basketball analyst.
*He was inducted into The National Jewish Sports Hall of Fame and Museum in 2012, and the Long Beach State Hall of Fame in 2013
*He has been an NCAA Tournament analyst for College Sports Television.
*Visit his official website: www.sethonhoops.com
*Follow him on Twitter and Facebook.