Common is an American rapper, songwriter, actor and writer who released his first LP, “Can I Borrow A Dollar?” under the Common Sense moniker in October 1992. His first major-label album Like Water for Chocolate (2000) received commercial success, and was certified Gold on August 11, 2000 by the Recording Industry Association of America. Common won a Grammy Award for Best R&B Song for “Love of My Life (An Ode to Hip-Hop)” in 2003. He also won an Academy Award for Best Original Song for his composition “Glory” with John Legend for the 2014 film Selma. Also an actor, Common has appeared in the films Smokin’ Aces, Street Kings, American Gangster, Wanted, Terminator Salvation, Date Night, Just Wright, Happy Feet Two, New Year’s Eve, Run All Night, Being Charlie, Rex, John Wick: Chapter 2,Smallfoot and Hunter Killer. From 2011 to 2014, Common starred as Elam Ferguson on the AMC western television series Hell on Wheels. Born Lonnie Rashid Lynn on March 13, 1972 in Chicago, Illinois, he is the son of Lonnie Lynn, an ABA basketball player turned youth counselor and educator Dr. Mahalia Ann Hines. He completed his schooling from Luther High School South and attended Florida A&M University for two years under a scholarship and majored in business administration. In 2020, Common began dating comedian Tiffany Haddish. He previously dated Angela Rye, singer Erykah Badu, actress Taraji P. Henson, and tennis player Serena Williams. He has one daughter named Omoye Assata Lynn, born in 1997. 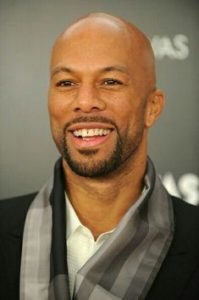 Common Facts:
*He was born on March 13, 1972 in Chicago, Illinois, USA.
*His real name is Lonnie Rashid Lynn.
*His parents divorced when he was six years old.
*He won a Golden Globe and an Oscar for the song “Glory.”
*His music has been compared to the likes of Kanye West.
*He supports PETA and has appeared in their print ad.
*He is the founder of the non-profit organization, Common Ground Foundation.
*He is a big fan of the American football team, Chicago Bears, and basketball team, Chicago Bulls.
*He is friends with Taraji P. Henson and Steve Harvey.
*He was once engaged to singer Erykah Badu.
*Visit his official website: www.thinkcommon.com
*Follow him on Twitter, YouTube, Facebook and Instagram.