Jim Carrey is a Canadian-American actor and comedian, best known for his roles in the films Ace Ventura: Pet Detective, The Mask, Eternal Sunshine of the Spotless Mind and Dumb and Dumber. He has also starred in How the Grinch Stole Christmas, Me, Myself & Irene, Bruce Almighty, Lemony Snicket’s A Series of Unfortunate Events, Penguins, The Incredible Burt Wonderstone, Kick-Ass 2, I Love You Phillip Morris, The Truman Show, Man on the Moon, The Number 23, Fun with Dick and Jane, Yes Man, Horton Hears a Who!, and A Christmas Carol. From 1990 to 1994, Carrey was a regular cast member of the American sketch comedy television series In Living Color. He earned his first Golden Globe Award nomination for Best Actor for his work in The Mask (1994). Carrey is one of the top-50 highest-grossing actors of all time at the North American box office, with over $2.5 billion total gross and an average of $94.3 million per film. 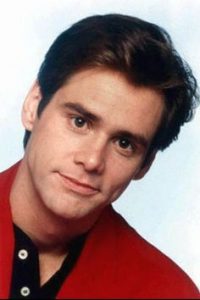 Books: How Roland Rolls, The 20th Birthday of the Comedy Store, The Mask, Me, Myself & Irene, Ace Ventura: Pet Detective

Jim Carrey Facts:
*He was born on January 17, 1962 in Newmarket, Ontario, Canada.
*He was raised a Roman Catholic and has three older siblings, Rita, Patricia, and John.
*As a child, he was a member of the Royal Canadian Sea Cadets.
*He dropped out of high school at 16.
*He did stand up comedy in local Toronto comedy clubs before moving to Los Angeles.
*He rose to fame as a cast member of the ensemble comedy television series In Living Color.
*He became a US citizen in October 2004 and remains a dual citizen of the United States and his native Canada.
*People Magazine named him one of the top 50 Most Beautiful People in the World in 1997.
*He was ranked number 5 in Star TV’s Top 10 Box Office Stars of the 1990s (2003).
*He published his first book, a children’s story, entitled How Roland Rolls in 2013.
*He is good friends with Jeff Daniels, Steve Oedekerk, Ewan McGregor, Steve Carell, and Steven Tyler.
*He has worked with five directors who have won a Best Director Oscar: Francis Ford Coppola, Ron Howard, Clint Eastwood, Milos Forman and Robert Zemeckis.
*Follow him on Twitter.