Cynthia Bailey is an American supermodel, actress, television personality, and entrepreneur. She is best known for her appearance on Bravo’s The Real Housewives of Atlanta. Bailey appeared on the Bravo reality television series The Real Housewives of Atlanta for its third season. She has also appeared in films and television shows including Without You I’m Nothing, For Love or Money, and The Cosby Show. Born Cynthia Denise Bailey on February 19, 1967 in Tuscumbia, Alabama to parents Barbara and Leon Bailey, she has one younger sister named Malorie. At age 18, Bailey moved to New York City to pursue a modeling career. She was married to Peter Thomas from 2010 to 2017. In July 2019, Bailey became engaged to Fox Sports correspondent Mike Hill. She has a daughter named Noelle with ex-boyfriend Leon. 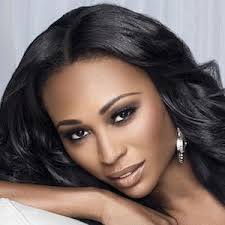 Cynthia Bailey Education:
The University of Alabama in Huntsville

Cynthia Bailey Facts:
*She was born on February 19, 1967 in Tuscumbia, Alabama, USA.
*Growing up, she was inspired by her grandmother, Mae Frankie Ford.
*She worked as a runway model in Milan and Paris.
*She joined the reality television show The Real Housewives of Atlanta in 2010.
*She appeared as Tech Addison in the film Sharknado: The 4th Awakens in 2016.
*Visit her official website: www.cynthiabailey.com
*Follow her on Twitter, Facebook and Instagram.