Iraqi-Emirati model who became notorious in 2013 after being expelled from Saudi Arabia supposedly for being “too handsome”, a story that became popular on social media. Omar has modeled for brands such as Gucci and Hugo Boss. He hosted a YouTube series titled Expensive Tastes in 2018. Born on September 23, 1989 in Baghdad, Iraq, Omar was raised in Dubai, in the United Arab Emirates. He has a brother named Ain Borkan Al Gala. He was educated at the Abu Obaida Ahjarah Public School in Dubai, and was also a student of the Faculty Executive Hotels International Institute of Hotel Management, where he studied hotel management. The news that spread out in 2013 that Omar was kicked out of Saudi Arabia for being too handsome. In 2015, Omar married Dubai-based fashion designer, Yasmin Oweidah with whom he has a son named Theyab. 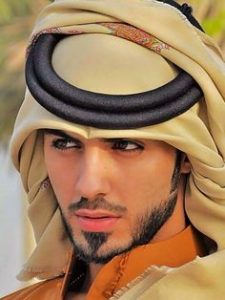 Omar Borkan Al Gala Facts:
*Born on September 23, 1989 in Baghdad, Iraq, he grew up in Dubai.
*He has been writing poetry and doing photography since he was 12 years old.
*He began his career in Dubai as a model.
*He became famous August 2013 after being on the news for getting sent out of a country.
*The first Arabic ambassador for Samsung in South America.
*Follow him on Twitter, YouTube, Facebook and Instagram.