Daisy Evans is an English singer who was a member of the British pop group S Club 8. She toured twice with S Club (7), appeared on many program’s, starred in a Disney Channel show, Bus Life and also had their own hit TV Series, I Dream. Born Daisy Rebecca Evans on November 30, 1989 in Barking, Essex, United Kingdom, she has an older brother named Aaron and an older sister named Alice. She attended Sylvia Young Theatre School. She has been married to Jonjo Shelvey since June 21, 2015. They have two daughters. 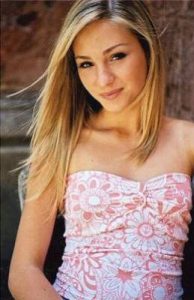 Daisy Evans Facts:
*She was born on November 30, 1989 in Barking, Essex, United Kingdom.
*Starting at age 3, Daisy began dancing.
*She was a member of the Pop group, S Club Juniors.
*In 2013 she became engaged to footballer Jonjo Shelvey.
*Follow her on Twitter.