D’Angelo Russell is an American professional basketball who currently plays for the Minnesota Timberwolves of the National Basketball Association. He was selected as a McDonald’s All-American in 2014 and played college basketball for the Ohio State Buckeyes. He was the second overall pick in the 2015 NBA draft by the Los Angeles Lakers. He has also played for the Brooklyn Nets and Golden State Warriors. Born D’Angelo Danté Russell on February 23, 1996 in Louisville, Kentucky, to parents Keisha and Antonio Russell, his siblings are Antonio, Lashaun, Tayshaun, and Cloee. Russell attended Central High School in his hometown of Louisville, Kentucky before transferring to Montverde Academy in Florida after his freshman year. 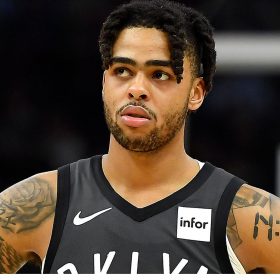 D’Angelo Russell Facts:
*He was born on February 23, 1996 in Louisville, Kentucky, USA.
*His full name is D’Angelo Danté Russell.
*He made his professional NBA debut in October 2015 in the season opener against Minnesota Timberwolves.
*He was named to the NBA All-Rookie Second Team with the Lakers in 2015.
*He is considered one of the most promising young players in the NBA.
*Follow him on Twitter, Facebook and Instagram.