Dani Thorne is an American actress and model who has appeared in several campaigns, including: Gap, Tommy Hilfiger, JC Penny’s, and Macy’s. In 2007, she appeared in Nickelodeon ‘s Zoey 101 series, and in 2008, in “Viola: The Traveling Rooms of a Little Giant”. She also appeared in an episode of General Hospital as Britney in 2010. Born Daniella Vanessa Thorne on January 19, 1993 in Miami, Florida, to Tamara and Reinaldo Thorne, she has two sisters, Bella Thorne and Kaili Thorne, and one brother, Remy Thorne, all pursued careers in acting and modeling. She belongs to Cuban, English, Italian, Irish, German, and Welsh descent. Along with her sisters, Kaili and Bella, Dani was an extra on the sets of Blind Ambition in 2008. 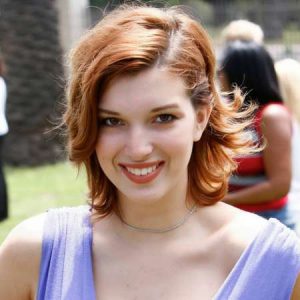 Dani Thorne Facts:
*She is the older sister of actress and singer Bella Thorne.
*Her father died in 2007 in a car accident.
*She began appearing on commercials at the age of four.
*She started designing clothes at the age of 15.
*Her fans are called Danisaurs.
*She enjoys traveling and loves her many animals, including a wolf hybrid named Voodoo.
*Visit her official website: www.danithornesworld.com
*Follow her on Twitter, SoundCloud, Facebook and Instagram.