Danica Mckellar is an American actress, voice actress, mathematician, author and education advocate. She is best known for playing the role of Winnie Cooper in the television series Wonder Years from 1988 to 1993. In 2015, she portrayed The Quail in the Netflix original series Project Mc2. She has also acted in a number of films, including Where Hope Grows, Heatstroke, 21 and a Wake-Up, Hack! and Raising Genius. She provided the voice of Miss Martian in the animated superhero series Young Justice. In addition to acting, she is also a New York Times bestselling author. She has written five non-fiction books, all dealing with mathematics including ‘Math Doesn’t Suck.’ Born Danica Mae McKellar on January 3, 1975 in La Jolla, California, to Mahaila and Christopher McKellar, she is of Scottish, Irish, French, German, and Dutch descent on her father’s side, and of Portuguese descent on her mother’s side. She began acting at a young age in her mother’s dance studio along with her younger sister, Crystal McKellar. She graduated from UCLA with a major in mathematics. She married Mike Verta in 2009, and the couple had a son named Draco in 2010 before getting divorced in 2012. She married Scott Sveslosky on November 15, 2014. 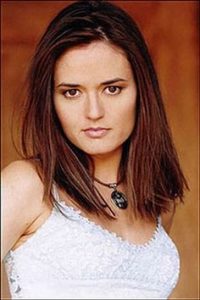 Danica Mckellar Facts:
*She was born in La Jolla, California but relocated to Los Angeles at age 8.
*She has a bachelor’s degree in math from UCLA.
*She speaks French fluently.
*She was the celebrity judge at UCLA Spring Sing 2005.
*Visit her official website: www.danicamckellar.com
*Follow her on Twitter, Facebook and Instagram.