Hillary Clinton is an American politician who became the first Lady of the United States from 1992 until 2000. She served as the 67th U.S. Secretary of State under President Barack Obama from 2009 until 2013. She ran for United States President in 2016. Her autobiography, Living History, was released in 2003, which sold more than one million copies in its first month and earned her a Grammy nomination for Best Spoken Word Album for the audio recording of the book. Born on October 26, 1947 in Chicago, Illinois, USA, Hillary Diane Rodham raised in a United Methodist family. She is a graduate of Wellesley College and Yale University Law School. Since October 11, 1975, she has been married to Bill Clinton, the 42nd President of the United States. They have one daughter, Chelsea Clinton born in 1980. 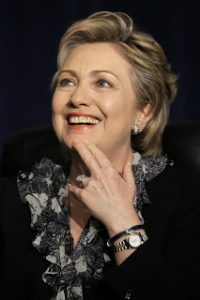 Hillary Clinton Facts:
*First woman to be nominated by a major U.S. party as a presidential candidate.
*She was a U.S. Senator from New York from 2001 until 2009.
*She was also a candidate for the Democratic Party’s nomination for President of the United States in 2008.
*Seven of Hillary’s eight great-grandparents were born outside of the United States.
*She has been listed twice on the list of the 100 most influential lawyers in USA.
*She placed number 22 in Celebrity Sleuth 25 Sexiest Women of 1997.
*Visit her official website: www.hillaryclinton.com
*Follow her on Twitter, Facebook and Instagram.