Daniella Rahme is a television presenter, actress, model and beauty pageant titleholder who crowned the 2010 Miss Lebanon Emigrant, and Miss Lebanon Australia in 2009. She is the winner of Dancing with the Stars Middle East Season 2. Rahme was born and raised in Australia to Lebanese parents. She has been featured on the cover of ELLE Arabia and Laha Magazine. She is the MBC X Factor (Arabic TV series) TV host in 2015. 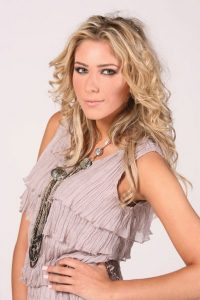 Daniella Rahme Family Details:
Father: Unknown
Mother: Unknown
Spouse: Not yet
Children: No
Siblings: She has a sister and a brother.

“Actually I was born and raised in Australia. I moved to Lebanon when I was young only for a few years, and I remember my parents went back and forth more than once while my sister and brother and I were only young. My mother was raised in Australia, her entire family was there. As for my father well he decided to raise us in Australia. I guess he saw opportunities for us there that he wanted us to grasp. After all, Australia is my mother country just as much as Lebanon is! I came back when I was 18 for the first time since I had been a little girl and relocated to Lebanon on my own when I was 19”. – Daniella Rahme