Seulgi is a South Korean singer and dancer. She is best known as a member of South Korean girl group Red Velvet and its sub-unit Red Velvet – Irene & Seulgi. The group’s hit singles “Red Flavor” and “Power Up” charted at number one on the Gaon Digital Chart; with other singles charting in the top five, including “Happiness”, “Ice Cream Cake”, “Dumb Dumb”, “Russian Roulette”, “Rookie”, “Peek-a-Boo”, “Bad Boy” and “Psycho”. She has also appeared on television shows such as The Last Song and Off to School, Descendants of the Sun, and Let’s Go! Dream Team. In 2015, Seulgi played Dorothy in a S.M. Entertainment production of the musical School Oz. 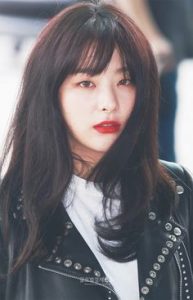 Seulgi Facts:
*She was born on February 10, 1994 in Ansan, Gyeonggi-do, South Korea.
*Her family consists of her parents and an older brother.
*She was educated at Ansan Byeolmang Middle School and School of Performing Arts Seoul.
*She began training in SM Entertainment in 2007.
*She is the lead vocalist and dancer of the South Korean K-pop group Red Velvet.
*She can speak both Korean and Japanese.
*Follow her on Instagram.