Danilo Petrovic is a Serbian tennis player who achieved a career-high singles ranking of World No. 137 on October 19, 2020, and a doubles ranking of world No. 205 on May 28, 2018. Turning professional in 2010, Petrović has won two singles and two doubles titles on the ATP Challenger Tour. 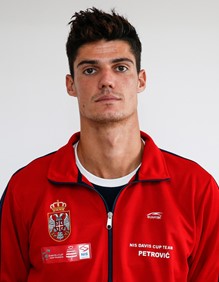 Danilo Petrovic Facts:
*He was born on January 24, 1992 in Belgrade, Serbia.
*He turned professional in 2010.
*He made his Davis Cup debut playing doubles for Serbia in the 2018 Davis Cup World Group Play-offs vs. India. Partnered with Nikola Milojević, they defeated Rohan Bopanna/Saketh Myneni in straight sets to help secure Serbia a decisive 3–0 lead after second day’s play. (Serbia eventually won the tie 4–0)
*He reached semi-finals at 2020 Forte Village Sardegna Open, before losing to former top 20 player and former French Open semi-finalist, Marco Cecchinato.
*Follow him on Instagram.