Andrey Rublev is a Russian professional tennis player who achieved a career-high singles ranking of World No. 8 on October 19, 2020. Turning professional in 2014, Rublev has won seven Tour singles titles and reached nine finals. He has achieved seven victories over top 10 players including Roger Federer, Dominic Thiem, and Stefanos Tsitsipas. He has reached the quarter-finals of the French and US Open and the semi-finals of the Davis Cup with Russia. Rublev won his only doubles title at the 2015 Kremlin Cup with Dmitry Tursunov, and among his singles titles are home victories in Moscow and St. Petersburg. 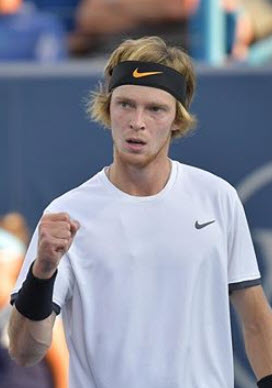 Born Andrey Andreyevich Rublev on October 20, 1997 in Moscow, Russia, to parents Andrey Rublev Sr. and Marina Marenko, his older sister, Anna Arina Marenko, is former professional tennis player. In his junior career, Rublev won the 2014 French Open singles title, defeating Jaume Munar in the final. He won a bronze medal in singles and a silver in doubles at the 2014 Summer Youth Olympics in Nanjing.

Andrey Rublev Facts:
*He was born on October 20, 1997 in Moscow, Russia.
*He made his debut in Luxembourg at age 13, getting his first win in his second competition in Phoenix.
*He turned professional in 2014.
*He broke into the top 10 of the ATP Tour in October 2020.
*His heroes include Roger Federer, Rafael Nadal, Grigor Dimitrov and Milos Raonic.
*Outside tennis, he practices boxing and basketball, and he is particularly interested in Mike Tyson.
*His favorite bands include Metallica, AC/DC, One Direction and Nautilus Pompilius, and he likes action-packed films with fighting
*Visit his official website: www.andrey-rublev.com
*Follow him on Twitter and Instagram.