Danny Dyer is a British actor and presenter. He is best known for television roles such as Malcolm in Skins, Mick Carter in EastEnders, and Yankie in Family Business, as well as film roles such as Moff in Human Traffic, Francis in Goodbye Charlie Bright, Tommy Johnson in The Football Factory, Charlie Milwall in Borstal Boy, Frankie in The Business, Steve in Severance and Gene Dekker in Outlaw. In 2007, he became the presenter of The Real Football Factories and The Real Football Factories International, a TV documentary series on Bravo. Born Daniel John Dyer on July 24, 1977 in Custom House, London, United Kingdom, to parents Christine and Antony Dyer, he has two younger siblings, a sister named Kayleigh, and a brother named Tony. Dyer’s parents divorced when he was age nine, and he was raised by his mother in Custom House. He was first spotted at a Sunday Drama School for underprivileged kids, in Kentish Town, by the agent Charlotte Kelly who got him an audition for the part of Martin Fletcher in the Granada Television series Prime Suspect 3 (1993), beginning his acting career at 16. His breakthrough role was as Moff in Human Traffic. [© celebsfacts.com] He has been married to Joanne Mas since September 3, 2016. They have three children, Dani, Arty and Sunnie. 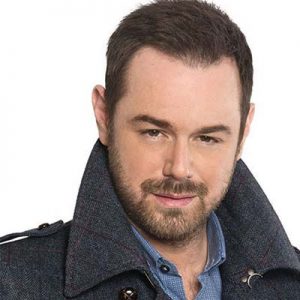 Danny Dyer Facts:
*He was born on July 24, 1977 in Custom House, London, United Kingdom.
*He is the oldest child of three.
*He began acting when he was a teen.
*Since the age of 14, he has been with his girlfriend, Joanne Mas.
*They became engaged in 2015, and got married on September 3, 2016.
*Visit his official website: www.dannydyer.com
*Follow him on Twitter and Instagram.