Daria Strokous is a Russian fashion model who has appeared on the cover or been featured in many international fashion magazines including Vogue Italia, Numéro, Vogue Japan, Vogue Russia, W Magazine, Vogue UK, Vogue Deutsch, American Vogue, V Magazine among others. She has also appeared in campaigns for many important fashion houses such as Dior, Prada, Chanel, Lanvin, Louis Vuitton, Jil Sander, Carolina Herrera, D&G, Alberta Ferretti, H&M, and Juicy Couture. Strokous played a small role in the 2011 film Contagion. 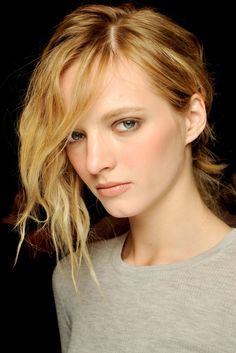 Born Daria Vladimirovna Strokous on September 25, 1990 in Moscow, Russia, to parents Olga and Vladimir Strokous, her family moved to Benin after she was born, where she lived and studied until the age of five. Strokous attended University of Southern California’s School of Cinematic Arts.

Daria Strokous Facts:
*She was born on September 25, 1990 in Moscow, Russia.
*She debuted in Fashion Weeks in Milan and Paris in September 2007.
*She was named one of V Magazine’s Top 10 Models of 2008.
*She was included in the New Generation of “Industry Icons” list by Models.com in 2014.
*She enjoys drawing, sowing, and knitting.
*Follow her on Twitter, Facebook and Instagram.