Uruguayan footballer Darwin Núñez Biography, Family, Height, Weight, Age, Measurements will be discussed here. Darwin Núñez’s personal details can be checked here. Núñez is a right-footed player, he possesses an athletic frame, excellent acceleration and sprinting speed is the defining facet of his athletic skillset, with his explosive change of pace being capable of creating immediate separation. 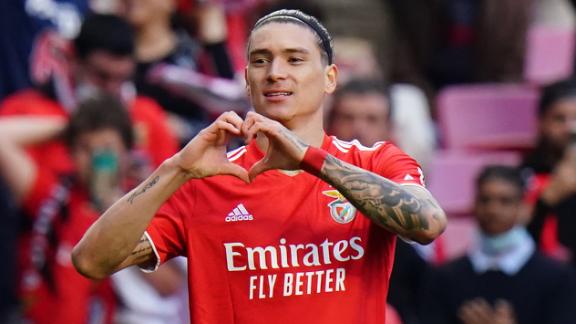 Darwin Núñez is a Uruguayan professional footballer who plays as a forward for Premier League club Liverpool and the Uruguay national team. Núñez previously played for Peñarol, Almería and Benfica before joining Liverpool in 2022. A former Uruguay youth international, Núñez scored on his international debut against Peru.

Darwin Núñez Facts:
*He was born on June 24, 1999 in Artigas, Uruguay.
*He joined Peñarol’s youth setup in 2013, aged 14.
*He came through Peñarol’s youth academy, being promoted to the first team in 2017.
*Benfica signed him in 2020 for a club-record transfer worth €24 million, the most expensive signing in Portuguese football history.
*He joined Premier League club Liverpool in 2022.
*He has a son name Darwin, with his partner Lorena Mañas.
*Follow him on Twitter.