Emma Roberts is an American actress and singer who played Addie Singer on the Nickelodeon television comedy series Unfabulous from 2004 to 2007. Roberts released her debut studio album titled Unfabulous and More in 2005. She is also known for her starring roles in multiple seasons of the FX anthology horror series American Horror Story. From 2015 to 2016, Roberts starred as Chanel Oberlin on the Fox comedy horror series Scream Queens. She has also appeared in many films, notably Aquamarine, Nancy Drew, Wild Child, Hotel for Dogs, Valentine’s Day, It’s Kind of a Funny Story, The Art of Getting By, Lymelife, 4.3.2.1., Scream 4, Adult World, We’re the Millers, Palo Alto, The Blackcoat’s Daughter, Nerve, Who We Are Now, and Paradise Hills. Born Emma Rose Roberts on February 10, 1991 in Rhinebeck, New York, to parents Eric Roberts and Kelly Cunningham, she is the niece of actresses Lisa Roberts Gillan and Julia Roberts. Emma attended Archer School for Girls in Los Angeles, California. She has a son with partner Garrett Hedlund. She was previously engaged to American Horror Story co-star Evan Peters. 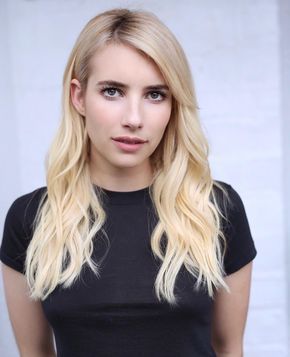 Emma Roberts Facts:
*She was born on February 10, 1991 in Rhinebeck, New York, to Kelly Cunningham and actor Eric Roberts.
*She is the niece of actresses Julia Roberts and Lisa Roberts Gillan.
*She made her film debut in the crime film Blow (2001).
*She ranked No. 78 on Maxim magazine’s Hot 100 Women of 2010 list.
*She is good friends with Jamie Lynn Spears, Devon Werkheiser, Aly Michalka, AJ Michalka, and Miranda Cosgrove.
*Her fashion icons are Mary-Kate Olsen and Ashley Olsen.
*Drew Barrymore, Winona Ryder and Rachel McAdams are her inspirations.
*Her favorite actor is Rupert Grint.
*She likes to collect purses and has a huge collection.
*She cites Anne Hathaway as her role model.
*She loves to play volleyball and swim.
*She has a phobia of flying.
*She has a tattoo, the half Moon on her chest on the right side (below the armpits).
*Visit her official website: www.emmaroberts.net
*Follow her on Twitter, Facebook and Instagram.