American hip hop recording artist who gained recognition in 2014 with his seventh mixtape Black Rose. His notable songs include “Stretched Out”, “Winners Never Lose”, “All Summer”, and “Perfect”. Dave East released his debut EP titled Born Broke, Die Rich on August 12, 2016. His debut studio album Survival (2019), peaked at number 11 on the Billboard 200. Also an actor, East has appeared in Beats, The Breaks, and Wu Tang: An American Saga. Born David Lawrence Brewster Jr. on June 3, 1988 in East Harlem, New York, he is of Bajan, Louisiana Creole, and Dominican descent. He was educated at Springbrook High School, Maryland and the University of Richmond in Richmond city, Virginia. He has a daughter named Kairi Chanel. 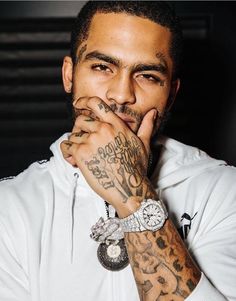 Dave East Facts:
*He was born on June 3, 1988 in East Harlem, New York, USA.
*He was raised as a Catholic but he converted to Islam.
*He played basketball, and football at Springbrook High School in Silver Spring, MD near Washington, D.C., and played with the Amateur Athletic Union alongside future NBA stars Ty Lawson and Kevin Durant.
*He began his musical career in 2012.
*His eleventh mixtape, Paranoia: A True Story (2017), peaked at number 9 on the US Billboard 200.
*He spent 6 months in prison in Baltimore.
*He was chosen in the “2016 XXL Freshman Class” list by XXL.
*Visit his official website: www.daveeastmusic.com
*Follow him on Twitter, YouTube, Facebook and Instagram.