David Bryan is an American musician and songwriter. He is mainly known as the keyboard player for the American rock band Bon Jovi. With the band, he has co-written songs and sings backing vocals. He is also the co-writer of the successful Broadway musical Memphis, for which he won two Tony Awards in 2010. Born David Bryan Rashbaum on February 7, 1962 in Perth Amboy, New Jersey, Bryan was raised Jewish. He is a Father to three children, twins Gabrielle Luna and Colton Moon, and Tyger Lily, with his former wife and high school sweetheart, April McLean, to whom he was married from 1990 to 2004. In 2010, Bryan married Lexi Quaas. 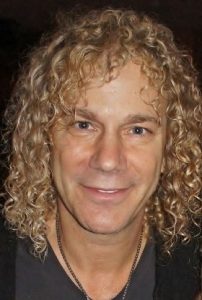 David Bryan Facts:
*He was born on February 7, 1962 in Perth Amboy, New Jersey, USA.
*He began to learn piano at age seven, and first played the keyboard for a band called Transitions.
*He co-wrote the musical Memphis and The Toxic Avenger with Joe DiPietro.
*He was inducted into the Rock and Roll Hall of Fame as a member of Bon Jovi in 2018.
*Visit his official website: www.davidbryan.com
*Follow him on Twitter and Instagram.