David Menkin is a Norwegian-born American actor and voiceover artist who has appeared in the films A Hologram for the King, Octane, Zero Dark Thirty, Survivor, Arthur Christmas, The Man from U.N.C.L.E., and Florence Foster Jenkins. He is notable for voicing Dad Hooman in Floogals, Chuck in Space Chickens in Space, Jack in Thomas & Friends: Digs and Discoveries, Taco / Bird in The Angry Birds Movie 2, and Munki / Rocky in Jungle Beat: The Movie. Born on May 10, 1977 in Moss, Norway, to a Norwegian mother and an American father, the family moved to Benin to partake in Saga Petrolium’s oil drilling in West Africa. He attended New York University and graduated in 1999 from Mountview Theatre School in London. 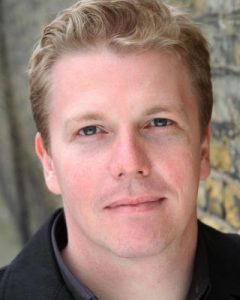 David Menkin Facts:
*He was born on May 10, 1977 in Moss, Norway.
*He started his acting career in the television movie Wit.
*For many years Menkin was provided the announcer voice for the Norwegian TV channel TV3
*He is fluent in both English and Norwegian.
*Follow him on Twitter and Instagram.