DeAnna Pappas is an American television personality. She is best known for her appearances in season eleven of the American Broadcasting Company reality television show The Bachelor, and season four of The Bachelorette. She is also famous for her previous work as co-host of Get Married. She has also appeared on such shows as EXTRA, The Ellen Degeneres Show, Good Morning America, Jimmy Kimmel, Hollywood 411, TV Guide Channel, and many more. Born DeAnna Marie Pappas on November 20, 1981 in La Jolla, California, USA, she is of Greek descent on her father’s side. She has an older brother, Thomas, and younger sister, Chrissy. She graduated from Georgia Military College in 2005 with an Associates Degree in General Studies. She received her real estate license from the Gaddy School in Georgia in 2006. She has been married to Stephen Stagliano since 2011. They have two children: daughter, Addison, and son, Austin. 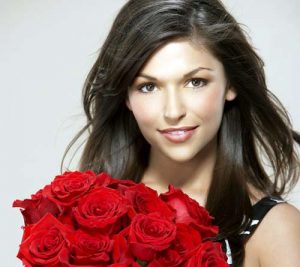 DeAnna Pappas Facts:
*She is the middle of three children.
*Her parents divorced when she was 6 years old.
*Her mother died due to cancer when she was 12 years old.
*She was raised primarily by her aunt and grandmother.
*She was a contestant on The Bachelor season 11, featuring entrepreneur and bachelor Brad Womack.
*She visited to the Middle East with the USO in 2009.
*She was once engaged to Jesse Csincsak.
*Visit her official website: www.deanna-pappas.com
*Follow her on Twitter and Instagram.