Kim Raver is an American actress, best known by the public for her television roles as Audrey Raines on 24 (2004–2007), as Kim Zambrano on Third Watch (1999–2005) and as Teddy Altman on ABC’s medical drama Grey’s Anatomy. From 2008 to 2009, she played Nico Reilly in the comedy-drama television series, Lipstick Jungle. She had also a recurring role on the NBC’s television series, Revolution. She has also appeared in the films Martin & Orloff, Mind the Gap, and Prisoner. She provided the voice of Captain Marvel in the 2018 animated superhero feature film Marvel Rising: Secret Warriors. Born Kimberly Jayne Raver on March 15, 1969 in New York City, New York, USA, she was raised by her mother, Tina Raver, and her stepfather, Chris Meltesen. Her siblings are Cybele Raver, Nadja Raver, Grace Raver, Aimée Raver, Jacob Raver, and William Raver. After graduating from Northfield Mount Hermon School in Northfield, Massachusetts, she attended Boston University, where she received a Bachelor of Fine Arts degree in drama. She is married to Manuel Boyer with whom she has two sons, Luke and Leo. 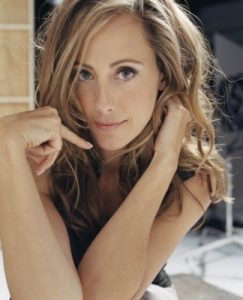 Kim Raver Facts:
*She is of German descent on her mother’s side.
*She started acting at the age of 6.
*She posed nude for a Vaseline ad while expecting her second child in 2007.
*She speaks French and German fluently.
*She has a dog named Jack.
*Follow her on Twitter and Instagram.