Justin Timberlake is an American pop singer, songwriter, and actor. He first came to prominence as a member of the boy band NSYNC, which became extremely famous in the late 1990s. In 2002, Timberlake began his solo career with hits like “SexyBack” and “My Love.” In 2002, he released his first official solo album Justified, which yielded the successful singles “Cry Me a River” and “Rock Your Body”, and earned his first two Grammy Awards. His second solo album “FutureSex/LoveSounds” in 2006, debuted at No. 1 on the Billboard 200 chart. He won Grammy Awards for Best Male Pop Vocal Performance for “What Goes Around… Comes Around” in 2008. Aside from his success in music, he has played prominent roles in a number of films, including Bad Teacher, The Social Network, In Time, and Friends with Benefits. Born Justin Randall Timberlake on January 31, 1981, in Memphis, Tennessee, to Lynn and Randall Timberlake, he was raised in the Baptist religion. He grew up in Millington, Tennessee, a small town north of Memphis. On October 19, 2012, he married actress Jessica Biel. They have a son, Silas Randall Timberlake. 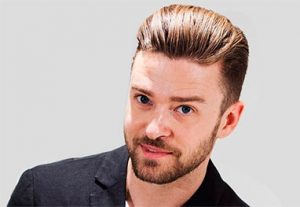 Justin Timberlake Facts:
*Born in Memphis, Tennessee, he spent much of his childhood in Shelby Forest.
*He was the lead singer and youngest member of the boy band NSYNC.
*He began his own career as a solo musician in 2002.
*He portrayed Justin Randall on the television show Star Search.
*He was the Team Ambassador for US team in 39th Ryder Cup.
*He was named as one of Teen People Magazine’s “21 Hottest Stars Under 21” in 1999.
*He is a fan of Björk.
*Visit his official website: www.justintimberlake.com
*Follow him on Twitter, YouTube, Facebook and Instagram.