Denzel Washington is an American actor, director, and producer born in Mount Vernon, New York. He is best known for his roles in ‘Glory’, ‘Malcolm X’ and ‘The Hurricane’. His accolades include three Golden Globe awards, a Tony Award, and two Academy Awards. He received an Academy Award for Best Actor for his role in Training Day. He’s also played memorable roles in such films as Flight, Remember the Titans, Cry Freedom and American Gangster. Born Denzel Hayes Washington, Jr. on December 28, 1954 in Mount Vernon, New York, his father, Denzel H. Washington, Sr., was a Pentecostal minister; his mother, Lennis Washington, a beautician and former gospel singer. He has four siblings including John David Washington. He attended Pennington-Grimes Elementary School till 1968. He went to Fordham University upon graduating from high school and earned a B.A. in Drama and Journalism in 1977. He attended American Conservatory Theatre, San Francisco, for one year before returning to New York. He married to Pauletta Pearson Washington in 1983. They have four children. 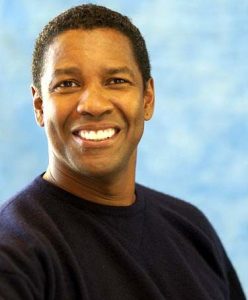 Denzel Washington Facts:
*His father was an ordained Pentecostal minister and his mother Lynne owned a beauty parlor.
*His parents got divorced when he was fourteen years old.
*He made his feature film debut in 1981 with the comedy film ‘Carbon Copy’.
*He is the first African-American actor to receive two Academy Awards.
*Empire magazine named him one of the 100 Sexiest Stars in film history (#77) (1995).
*One of People magazine’s 50 Most Beautiful People in the World (1990) and (2002).
*He was listed #59 on VH1’s 100 Hottest Hotties.
*He was chosen as People magazine’s Sexiest Man Alive (1996).