Jimmy Fallon is an American comedian, actor, musician and television presenter. He is best known by the public for his work in television as a cast member on Saturday Night Live and as the host of late-night talk show The Tonight Show Starring Jimmy Fallon. From 2009 to 2014, he hosted NBC’s Late Night with Jimmy Fallon. His notable film credits include Almost Famous, Factory Girl, Taxi, Fever Pitch and Whip It. Born as James Thomas Fallon Jr. on September 19, 1974 in Brooklyn, New York, to Gloria and James Fallon, Sr., he was raised in Saugerties, New York. He grew up with an interest in comedy and music. He has an elder sister, Gloria. He attended the College of Saint Rose in Albany, NY. He graduated from Saugerties High School in 1992. He has been married to Nancy Juvonen since December 22, 2007. They have two children. 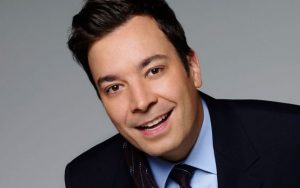 Jimmy Fallon Facts:
*He belongs to Irish, German, and Norwegian descent.
*He is a 1992 graduate of Saugerties High School.
*One of People magazine’s 50 Most Beautiful People in the World (2002).
*He is very close friends with singer Justin Timberlake, and actress Drew Barrymore.
*He is a big fan of singer Ellie Goulding.
*Follow him on Twitter, Google+, Facebook and Instagram.