Naima Mora is an American fashion model and television personality. She is best known as the winner of the fourth cycle of America’s Next Top Model in 2005. She has modeled for several magazines, including ELLE, CoverGirl, Fuego, Us Weekly, Radar, In Touch, Star, Teen People, Split Clothing, and elsewhere. Apart from that she has also modeled for many fashion houses such as Christopher Deane and Gharani Strok. Mora served as a judge at the Miss Teen USA Pageant in 2005. Born on March 1, 1984 in Detroit, Michigan, to parents Theresa and Francisco Mora Catlett, she was raised in Detroit with five sisters. She is of Irish, African American and Mexican descent. Mora attended Bates Academy for middle school, and graduated from Cass Technical High School in Detroit in 2002. 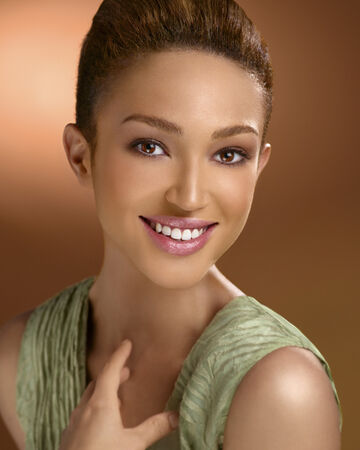 Naima Mora Facts:
*She was born on March 1, 1984 in Detroit, Michigan, USA.
*Her father is half Mexican and half African-American while her mother is Irish and African-American.
*Her older sister, Ife, is a singer/songwriter, and her twin sister, Nia, is a photographer.
*She’s a trained dancer.
*She became the winner of Cycle 4 of America’s Next Top Model, where other candidates were Kahlen Rondot (Runner-up), Brita Petersons, Sarah Dankelman, Brandy Rusher, Noelle Staggers, Lluvy Gomez, Rebecca Epley & Tiffany Richardson, Tatiana Dante, Michelle Deighton, Christina Murphy, Brittany Brower, and Keenyah Hill.
*She was named after the John Coltrane song “Naima.”
*She released the iBook Naima Mora’s Model Behavior in September 2012.
*She was the singer for the unsigned band Chewing Pics.
*Her favorite TV show is Law & Order, and her favorite movie is Whale Rider.
*Follow her on Twitter, YouTube and Instagram.