Dermot Mulroney is an American actor. He is best known for roles in the films My Best Friend’s Wedding, August: Osage County, Young Guns, About Schmidt, Insidious: Chapter 3, Samantha, Where the Day Takes You, and The Last Outlaw. He played Patrick in the 2016 film Lavender. His television credits include Long Gone, New Girl, Enlightened, Crisis, Shameless, SoundBreaking, and Pure Genius. Born in Alexandria, Virginia, on October 31, 1963, to Ellen and Michael Mulroney, he has three brothers, Conor, Kieran, and Sean, and a sister, Moira. He began playing the cello at age seven, and started performing with youth orchestra and community theater groups. He studied film and television production at Northwestern University. He married Catherine Keener in 1990, and the couple had a son named Clyde Mulroney in 1999 before getting divorced in 2007. He married Tharita Cesaroni in 2008. They have two daughters. 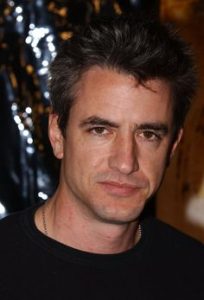 Dermot Mulroney Facts:
*Both of his parents were originally from Iowa, and is the third of five children.
*His father was a professor at the Villanova University School of Law.
*His younger brother Kieran is also an actor.
*He and his younger brother, Sean Mulroney, are owners of “The Double Door”, one of Chicago’s more popular music clubs.