Tom Hanks is an American actor and producer. He is best known for his roles in the films Splash, Big, Toy Story, A League of Their Own, The Green Mile, Sleepless in Seattle, Forrest Gump, Apollo 13, Turner & Hooch, Saving Private Ryan, Cast Away, Road to Perdition, You’ve Got Mail, Cloud Atlas, Saving Mr. Banks, Captain Phillips, and Sully. He provided the voice of the lead character Woody in the Pixar animated film series Toy Story. He won Academy Awards for Best Actor, for his performances in Philadelphia in 1993 and Forrest Gump in 1994. Born Thomas Jeffrey Hanks on July 9, 1956 in Concord, California, to Janet Marylyn Frager and Amos Mefford Hanks, he belongs to Portuguese and English descent. After graduating in 1974, he attended junior college in Hayward, California. He started performing with the Great Lakes Shakespeare Festival in 1977. He made his film debut with a minor role in the 1980 horror film He Knows You’re Alone. As a director and screenwriter, he made his debut in the musical comedy That Thing You Do! (1996). He has been married to Rita Wilson since April 30, 1988. He was previously married to Samantha Lewes from 1978 to 1987. He has four children; Colin, Elizabeth, Chet and Truman. 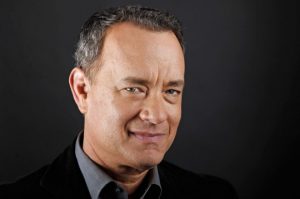 Tom Hanks Facts:
*His parents got divorced when he was four years old.
*He became the youngest person to receive the American Film Institute’s Lifetime Achievement Award in 2002.
*He is a Democrat.
*He is a big supporter of the baseball team Cleveland Indians.
*For his role as Andrew Beckett in the 1993 film Philadelphia, he lost 30 pounds.
*He gained weight for and later lost 55 pounds playing Chuck Noland in the 2000 film Cast Away.
*He supports football club Aston Villa.
*He supports same-sex marriage.
*He used to sell popcorn and peanuts as a teenager at the Oakland Coliseum.
*Shares his birthday with Jack White, Chris Cooper, David O’Hara, Courtney Love, O.J. Simpson and Donald Rumsfeld.
*Follow him on Twitter, Facebook and Instagram.