Dharmendra is an Indian film actor, producer and politician known for his works in Hindi cinema. He is best known for his role as Veeru in the 1975 superhit film, Sholay. The veteran actor has worked in over 250 films in Indian film industry. He was the highest paid Indian film actor in 1970s. For his contribution to film industry, he earned the Filmfare Lifetime Achievement Award in 1997. Dharmendra was born to Kewal Kishan Singh Deol and Satwant Kaur on 8 December 1935 in Nasrali, a village in Ludhiana district, Punjab, India, as Dharam Singh Deol. He has six children including Sunny Deol, Bobby Deol and Esha Deol 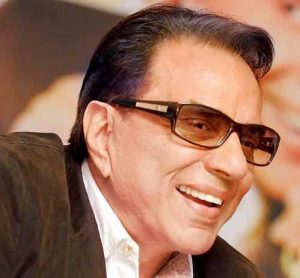 Dharmendra Facts:
*He made his film debut with Arjun Hingorani’s Dil Bhi Tera Hum Bhi Tere in 1960.
*His father, Kewal Kishan Singh Deol, was school’s headmaster.
*He was the first Indian star to be voted among the most handsome men in the world in mid-70s.