James Cameron is a Canadian film director, producer, and screenwriter. Following his commercial breakthrough with the science fiction action film The Terminator (1984), his best known works include Aliens (1986), The Abyss (1989), Terminator 2: Judgement Day (1991), Titanic (1997) and Avatar (2009). His $200 million dollar movie Titanic, became the first film to earn more than $1 billion with 14 Academy Award nominations and won 11 of them. Cameron was born James Francis Cameron on August 16, 1954, in Kapuskasing, Ontario, the son of Shirley, an artist and nurse, and Phillip Cameron, an electrical engineer. He was raised in Chippawa, Ontario. He moved to Brea, California in 1971. He has four children: three daughters, Josephine, Claire, and Elizabeth and a son Quinn. 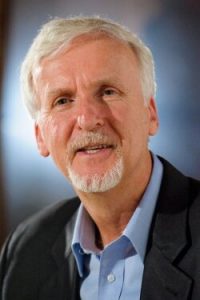 James Cameron Facts:
*He is the eldest of five children of his parents.
*He left his truck driver job for the film industry after watching the original Star Wars film in 1977.
*He wrote most of the screenplay of Terminator in his car.
*The Titanic movie has a duration of 2 hours and 40 minutes. It is the same amount of time the actual Titanic took to sink.
*He is vegan.
*He is very close friends with Arnold Schwarzenegger.
*Follow him on Twitter.