Diana Taurasi is an American professional basketball player who plays for the Phoenix Mercury of the Women’s National Basketball Association (WNBA). Widely regarded as one of the greatest female basketball players of all time, Taurasi was drafted by Phoenix first overall in the 2004 WNBA draft. She has won the WNBA Rookie of the Year Award, three WNBA championships, one WNBA Most Valuable Player Award, two WNBA Finals MVP Awards, four Olympic gold medals, five scoring titles, and three FIBA World Cups. Born Diana Lorena Taurasi on June 11, 1982 in Glendale, California, to parents Liliana and Mario Taurasi, she has an older sister named Jessika. She attended and played basketball at Don Antonio Lugo High School, where she received the 2000 Naismith National High School Player Award as well as the 1999 and 2000 Ms. Basketball State Player of the Year Awards. In May 2017, Taurasi married Phoenix Mercury Director of Player Development and Performance Penny Taylor. Together they have one son, Leo Michael Taurasi-Taylor. 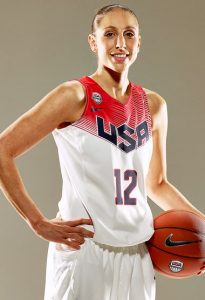 Diana Taurasi Facts:
*She was born on June 11, 1982 in Glendale, California, USA.
*She was raised in Chino, California.
*Her father, Mario Taurasi, was born in Italy and raised in Argentina.
*Her mother, Liliana Taurasi, is Argentinian.
*She was drafted by Phoenix first overall in the 2004 WNBA draft.
*She led the Mercury to WNBA Championships in 2007 and 2009 and was named WNBA MVP and Finals MVP in 2009.
*She was voted by fans as one of the WNBA’s Top 15 Players of All Time in 2011.
*She became the WNBA all-time leading scorer on June 18, 2017.
*Visit her official website: www.dianataurasi.com
*Follow her on Twitter, Facebook and Instagram.