Jan-Lennard Struff is a German professional tennis player who achieved a career-high singles ranking of World No. 29 on August 31, 2020, and a doubles ranking of world No. 21 on October 22, 2018. Turning professional in 2009, Struff has won three ATP doubles titles. He had his best Grand Slam result by reaching the fourth round of the 2019 French Open, where he lost to top seed Novak Djokovic in straight sets. 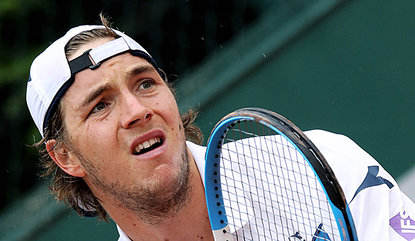 Jan-Lennard Struff Facts:
*Born on April 25, 1990 in Warstein, Germany, both of his parents are tennis coaches.
*He began playing tennis at age 6.
*He turned professional in 2009.
*In 2014, he advanced to his first semifinals on the ATP Tour in Marseille, Munich and Metz.
*He made his Davis Cup debut for Germany against France in the first round in 2015.
*He reached the third round of the Paris Masters after beating world No. 3 Stan Wawrinka in 2016.
*In 2017, he reached the semifinals of both Winston-Salem and St. Petersburg.
*His favourite surface is clay, shot is backhand and tournament is Roland Garros.
*His coach is Carsten Arriens and his fitness trainer is Uwe Liedtke.
*He supports German football club Borussia Dortmund.
*His favourite food is pizza.
*Visit his official website: www.janlennardstruff.com
*Follow him on Twitter, Facebook and Instagram.