Dianna Agron is an American actress, singer, and dancer. She is best known by the public for her role as high school cheerleader Quinn Fabray in the FOX musical comedy-drama television series Glee, for which she won a Breakthrough Of The Year Award in 2010. She can also be recognized for her role in I Am Number Four, The Romantics, Burlesque, The Hunters and The Family. She has acted on television shows such as Close To Home, CSI: NY, Numb3rs and Shark. Born Dianna Elise Agron on April 30, 1986 in Savannah, Georgia, to Mary and Ronald S. Agron, she was raised in San Antonio, Texas and San Francisco, California. She began dancing at age 3, first focusing on jazz and ballet, then later taking up hip-hop. When she was a teenager she used to teach it to younger kids. She attended Hebrew school and had a bat mitzvah. She attended Burlingame High School in California. She has been married to Winston Marshall since October 15, 2016. 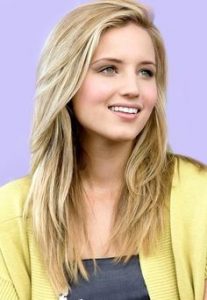 Dianna Agron Facts:
*She began dancing at the age of 3.
*Her father is Jewish while her mother converted to Judaism.
*She is a vegetarian and a supporter of PETA.
*People Magazine named her one of the top 100 Most Beautiful People in the World in 2010.
*She was listed #81 in the 2011 FHM list of “100 Sexiest Women in the World”.
*She was named #44 on the 2012 FHM Sexiest Woman awards.
*She is a huge fan of Tim Burton.
*Follow her on Twitter, Facebook and Instagram.