Naomi Osaka is a Japanese professional tennis player who became the first Japanese tennis player to win a Grand Slam singles tournament, defeating Serena Williams in the final of the 2018 US Open. Turning professional in 2013, Naomi achieved a career-high singles ranking of World No. 1 on January 28, 2019. She won her first two Grand Slam singles titles in back-to-back Grand Slam tournaments at the 2018 US Open and the 2019 Australian Open. In 2020 Osaka won the US Open. Born on October 16, 1997 in Osaka, Japan, to a Haitian father, Leonard “San” François, and a Japanese mother, Tamaki Osaka, she has an older sister, Mari, who is a professional tennis player as well. Her family moved to the United States when she was just three years old. She graduated from Elmont Alden Terrace Primary and Broward Virtual High School. Naomi stands 5 feet 11 inches tall and weighs 152 pounds. 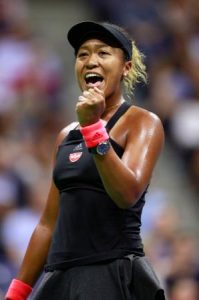 Naomi Osaka Facts:
*She was born on October 16, 1997 in Osaka, Japan.
*Her father is Haitian and her mother is Japanese.
*She turned professional in September 2013.
*She is a three-time Grand Slam singles champion.
*For practical reasons, both Naomi and her older sister Mari took their mother’s name .
*She has dual citizenship of Japanese and American.
*Visit her official website: www.naomiosaka.com
*Follow her on Twitter, Facebook and Instagram.