Prithviraj was born on October 16, 1982, to Malayalam actor Sukumaran and veteran actress Mallika Sukumaran. He is an actor, playback singer and producer best known for his work in Malayalam films. He has also acted in a number of Tamil, Telugu and Hindi films. Prithviraj’s elder brother Indrajith Sukumaran and sister-in-law Poornima Indrajith are also film actors. He has been married to BBC India reporter Supriya Menon since 2011. They have a daughter, Alankrita. 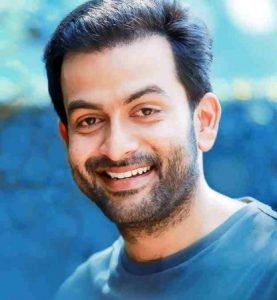 Prithviraj Sukumaran Facts:
*For his performance in the Malayalam film, Vaasthavam, he won the Kerala State Film Award for Best Actor in 2006.
*He received the National Film Award for Best Feature Film for his role in Malayalam in 2011.
*He began his singing career in his 2009 film Puthiya Mugham.
*He was asked to wear a beard in films because directors felt that it would make him look older.
*Follow Prithviraj on Twitter and Facebook .