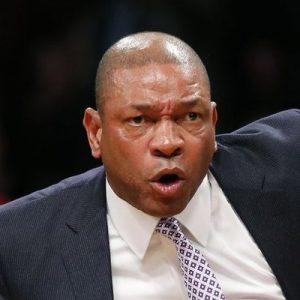 Doc Rivers Facts:
*He was born on October 13, 1961 in Chicago, Illinois, USA.
*He attended Marquette University, where his coach gave him the nickname Doc.
*He played as a point guard in the NBA.
*He represented the United States with the national team in the 1982 FIBA World Championship.
*He was drafted in the second round (31st overall) of the 1983 NBA draft by the Atlanta Hawks.
*He began his coaching career with the Orlando Magic in 1999.
*He was inducted into the Marquette [University] M Club Hall of Fame in 2004.
*He was inducted into the Central Florida Sports Hall of Fame in 2011.
*His son Jeremiah played college basketball at Indiana.
*Follow him on Twitter and Instagram.