Jon Bon Jovi is an American singer-songwriter and actor, best known as the founder and lead singer of the Grammy Award-winning rock band Bon Jovi, which was formed in 1983. The band’s third album, Slippery When Wet, sold over 20 million copies and included three Top 10 singles, two of which reached No. 1 (“You Give Love a Bad Name” and “Livin’ on a Prayer”). Bon Jovi has also released two solo albums. As an actor, Bon Jovi starred in the films Moonlight and Valentino and U-571 and appeared on television in Sex and the City, Ally McBeal and The West Wing. Born John Francis Bongiovi Jr. on March 2, 1962 in Perth Amboy, New Jersey, to parents John Francis Bongiovi, Sr. and Carol Sharkey, he has two brothers named Anthony and Matthew. He was educated at Saint Joseph High School and Sayreville War Memorial High School. He married his high school sweetheart Dorothea Hurley in 1989. They have four children: Stephanie, Jesse, Jacob and Romeo Jon. 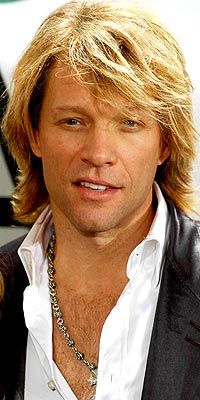 Jon Bon Jovi Facts:
*He was born on March 2, 1962 in Perth Amboy, New Jersey, USA.
*He graduated from Sayreville War Memorial High School.
*One of the founding members of Bon Jovi.
*People Magazine named him one of the top 50 Most Beautiful People in the World in 1996.
*He campaigned for Al Gore during the 2000 Presidential election
*He was ranked in 31st place out of 100 the best vocalist in history i 2006.
*As a songwriter, he was inducted into the Songwriters Hall of Fame in 2009.
*Visit his band’s official website: www.bonjovi.com
*Follow him on Twitter, YouTube, SoundCloud, Facebook and Instagram.