Dolores O’Riordan was an Irish musician, singer and songwriter, best known as the lead vocalist of the rock band The Cranberries, whose hit songs include ‘Linger’ and ‘Zombie.’ With The Cranberries, she performed at the Special Olympics opening ceremony on June 9, 2010. Born Dolores Mary Eileen O’Riordan in Ballybricken, Co. Limerick, Ireland, on September 6, 1971, to Eileen and Terence O’Riordan, she was the youngest of seven children. She was raised as a Roman Catholic, and attended Laurel Hill Coláiste FCJ school in Limerick. In 1994, she married Don Burton, the former tour manager of Duran Duran, they had three children before getting divorced in 2014. She died in London on 15 January 2018. 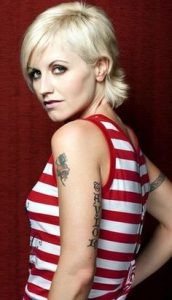 Dolores O’Riordan Facts:
*The youngest of seven children.
*She released her solo album “Are You Listening?” in June of 2007.
*She was listed among the ten richest women in Ireland in 2006.