George Strait is an American country music singer, actor, and producer. The “King of Country”, Strait has the most number one country hits of any recording artist ever. Born George Harvey Strait on May 18, 1952 in Poteet, Texas, to John Byron Strait and Doris Couser Strait, he was raised on a 2,000 acre cattle ranch near Big Wells, Texas. He had two siblings. He played in a rock and roll garage band while he was in high school. He married to Norma Gail Voss in 1971 and they had two children together. 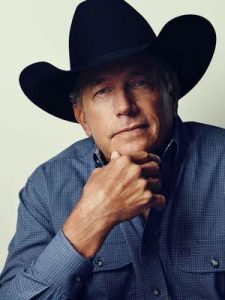 George Strait Facts:
*Best known by the public for his traditional country sound.
*He performed with his fellow soldiers in the band Rambling Country while stationed with the U.S. Army in Hawaii.
*People Magazine named him one of the top 50 Most Beautiful People in the World in 1990.
*His hobbies include steer-roping, fishing, hunting, skiing and golf.
*He cites George Jones, Hank Williams, and Merle Haggard as his biggest music influences.
*Visit his official website: www.georgestrait.com
*Follow him on Twitter, YouTube, Myspace, Facebook and Instagram.