Itati Cantoral is a Mexican actress of film, television, and theatre. She is best known for her roles as Soraya Montenegro in Maria la del Barrio, Isabel Durán de Velasco in Televisa’s Amores con trampa and Alejandra Álvarez del Castillo in Hasta Que El Dinero Nos Separe. She won TVyNovelas Awards for Best Female Antagonist in Maria la del barrio and Sin pecado concebido. She also won TVyNovelas Award for Best Lead Actress for Hasta Que El Dinero Nos Separe. Born Itatí Cantoral Zucchi on May 13, 1975 in Mexico City, Distrito Federal, Mexico, to Roberto Cantoral and Itati Zucchi, she is of Mexican descent on her father’s side, and of Italian descent on her mother’s side. She made her TV debut in 1986 in the series La telaraña. She was married to Eduardo Santamarina from 1999 to 2004 and Carlos Alberto Cruz from 2008 to 2014. 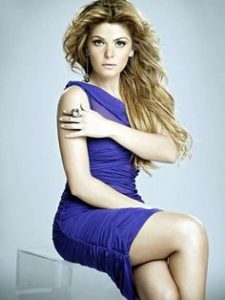 Itati Cantoral Facts:
*She is the daughter of Argentine actress Itati Zucchi and Mexican composer Roberto Cantoral, and sister of singer José Cantoral.
*She was accepted into the Televisa actors’ academy when she was 13 years old.
*She is best friend with singer/actress Thalía.
*Follow her on Twitter, Facebook and Instagram.