Dominic Thiem is an Austrian professional tennis player who achieved a career-high singles ranking of World No. 3 on March 2, 2020. Turning professional in 2011, Thiem has won 17 ATP Tour singles titles, including winning the 2020 US Open and the 2019 BNP Paribas Open, and reached four Grand Slam finals. He reached his first Grand Slam final at the 2018 French Open, and won his first Grand Slam title on September 13, 2020 at the US Open, defeating German Alexander Zverev in the final. Born on September 3, 1993 in Wiener Neustadt, Austria, to parents Karin and Wolfgang Thiem, Thiem was only 6 when he started playing tennis. In 2015, he won his first career ATP World Tour title in Nice, France. 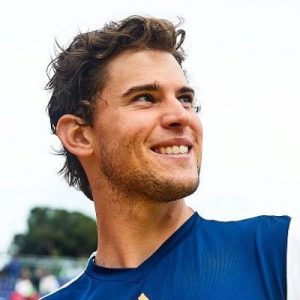 Dominic Thiem Facts:
*He was born in Wiener Neustadt, Austria on September 3, 1993.
*He started playing tennis at the age of 6.
*He turned professional in 2011.
*He won the Argentina Open in 2016.
*He is a supporter of English Fooltball Club, Chelsea FC.
*Visit his official website: www.dominicthiem.tennis
*Follow him on Twitter, Facebook and Instagram.