Don Cheadle is an American actor best known for his role as Paul Rusesabagina in the 2004 drama Hotel Rwanda, for which he received an Academy Award nomination. His other films credit include Iron Man 2, Crash, Traffic, Boogie Nights, and Ocean’s Eleven. Born Donald Frank Cheadle in Kansas City, Missouri, he is the son of Donald Frank Cheadle, Sr., a psychologist, and Bettye, a teacher. He has a brother, Colin and a sister, Cindy Cheadle. He has a half brother named Andrew Kilbourne. He has been in a relationship with Bridgid Coulter since 1992. He has two daughters named Imani and Ayana. 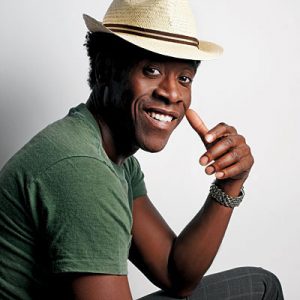 Don Cheadle Facts:
*He made his film debut with a small role as a hamburger server in 1985’s Moving Violations.
*His sister, Cindy Cheadle, is a teacher in Washington, D.C. and his brother works in Denver’s mayor’s office.
*He is friends with George Clooney.
*Follow Don on Twitter.